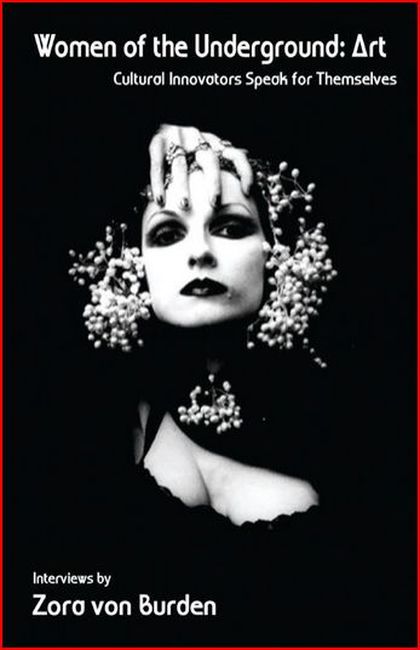 The unconventional, the radical, the subversive, the unorthodox:
revealing interviews with underground women artists.

“It is not about provocation, reaction or even invocation, it is about transformation: mentally and physically.”—Marina Abramovic, artist

“Art is subjective, and if one sees something in an image, that projection is a reflection of the spectator, who sees what he or she wants to see, whose critique is relevant to him or herself, exposing his or her own perversions.”—Irina Ionesco, artist

Until the late twentieth century, women’s creative skills were relegated to craft and decorative arts, and valued only for utilitarian purposes in service to others and the manufacturing of products to benefit society.

After enduring the great injustice of being denied the freedom that self-expression brings through art for the joy of the human spirit, Women of the Underground: Art celebrates those female cultural innovators who are creating new artwork that pushes boundaries, dares to question, and redefines the genres of mixed media; theater; film; photography; and visual, conceptual, and performance art.

This anthology will inspire artists and everyone interested in alternatives to mainstream culture, as well as serve as a reference book for art historians, twenty-six female artists describe their ideas, beginnings, influences, and creative techniques. 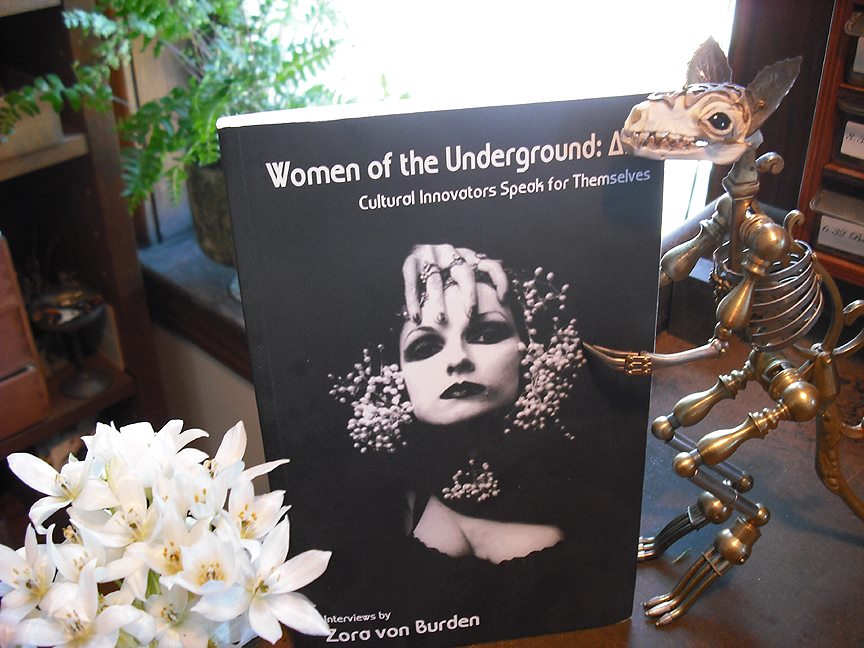 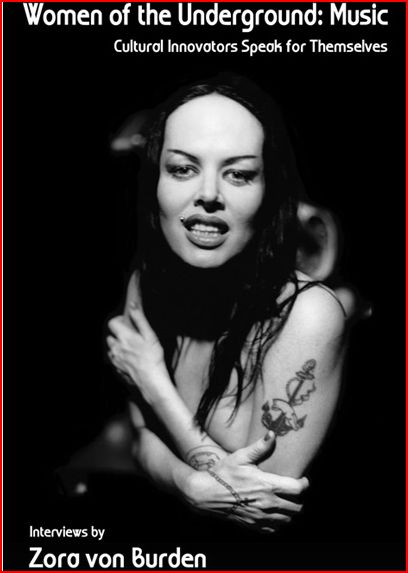 In a series of twenty candid interviews with radical women musicians, author Zora von Burden gives the forerunners of this generation a voice and probes the depths of how and why they broke through society’s limitations to create works of outstanding measure. Among the musical genres covered are rock, punk, goth, industrial, electronica, performance art, lounge, and more. An inspiration to young women and fascinating to music fans of all ages and genders, these musical innovators are unconventional, exceptional groundbreakers who have strong followings and have influenced generations for the past fifty years and beyond. An essential reference work for libraries, universities, contemporary art museums, and cultural institutions.

Editorial Reviews
From Booklist The 24 women who are interviewed in this entertaining collection are all in their own way counterculture figures, some, like Laurie Anderson, better known than others. Von Burden calls them “incendiary revolutionaries” and “cultural engineers,” which are apt descriptions since each one forged her distinctive identity without commercial considerations. Rockabilly singer Wanda Jackson, a contemporary of Elvis Presley (she toured with the King), and Ana da Silva, the founder of the all-female postpunk band the Raincoats, were ahead of their time. Others are known because of their associations with seminal bands: Maureen Tucker was the drummer for the Velvet Underground; Pauline Black was lead singer for the Selecter, a popular English ska band. Von Burden is a skilled interviewer, asking astute questions, managing to get even the most reticent subjects to open up. Quite often, the answers can be startling. When asked what has been the most satisfying aspect of her career, Anderson answers simply, “The fact that I can continue.” A fascinating and important collection for anyone with an interest in the role of women in popular culture. --June Sawyers Review "Nothing about Zora von Burden’s book of interviews with female musicians and performance artists is typical. Her questions for her subjects are probing and intimate…The format of the book itself is unique, in that the interviews speak entirely for themselves…If you want to make art, make art, is the unfaltering message of Women of the Underground: Music."--Bitch Magazine

Each interview is prefaced by a concise, one-page biography of the woman being interviewed, a critical inclusion because some of these women (for all of their genius and influence) are not well known. That’s what makes this book so important; without the work of the women in the underground music scene, music as we know it today would not exist. The role of women in music would be radically different had these women not dared to shake their fists in the face of convention. What becomes evident as the interviews unfold, is how much of our cultural landscape has been shaped by these artists, many of whom remain obscure to mainstream audiences.

Wanda Jackson, the first interviewee in the book, was a contemporary of Elvis. Jackson’s career as the Queen of Rockabilly and the First Lady of Rock and Roll spans over fifty years. A European revival of her music in the ’80s brought in new listeners and directly influenced modern rockabilly music. While Elvis is a household name, Jackson, winner of two Grammy Awards and an inductee into the Rock and Roll Hall of Fame, is not.

This theme, while not overt, is central to Women of the Underground: Music. Everyone knows Lou Reed, not everyone knows Maureen Tucker, percussionist for the Velvet Underground and successful solo artist. Would Rob Zombie have as much creative freedom today without the success of White Zombie? Sean Yseult, former White Zombie bassist, wrote much of their music while frontman Rob Zombie wrote lyrics and performed. Would Nirvana have existed without the influence of bands like The Raincoats and Frightwig?

Concentrating her questions on the musical careers and not overly prying into the personal lives of her subjects, von Burden allows each artist to tell her story in her own words—and many of them take congruous paths. Many of the artists started their careers in their early teens; almost all of them experienced extreme poverty. Some of the musicians interviewed moved fluidly between music and sex work; some out of necessity, others out of personal and artistic exploration.

Women of the Underground: Music is very obviously a labor of love. Well-researched and thoughtful questions provoke insightful responses. A common thread of fearlessness and ferocity emerges from the stories of twenty very different women.

Adele Bertei, member of The Contortions, offered this: “Take the risks, fight the good fight, never be afraid to be a loner, for that is precisely where you will find community. Risk is the fountain of youth and the fire of transformation. It’s all about alchemy–learning how to transform the basest shit into the purest of gold, and these days, we are sorely in need of master magicians.”


About the Author Zora von Burden was born and raised in San Francisco, California. A frequent contributor to the San Francisco Herald, von Burden also wrote the screenplay for Geoff Cordner's underground cult classic film, Hotel Hopscotch.
Lydia Lunch holding a copy of Women of the Underground: Music (below left) 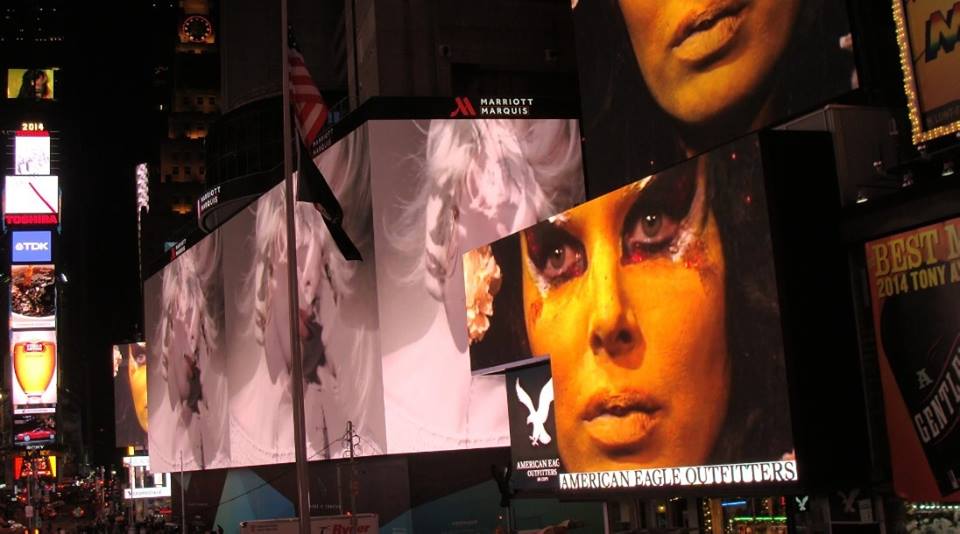 With Lydia Lunch and Kembra Phaler 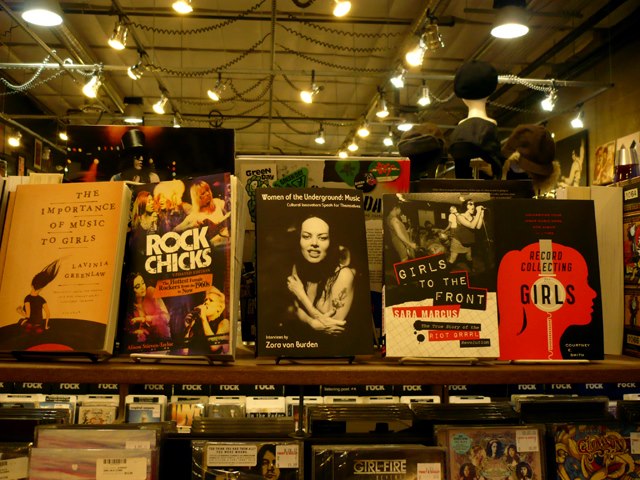 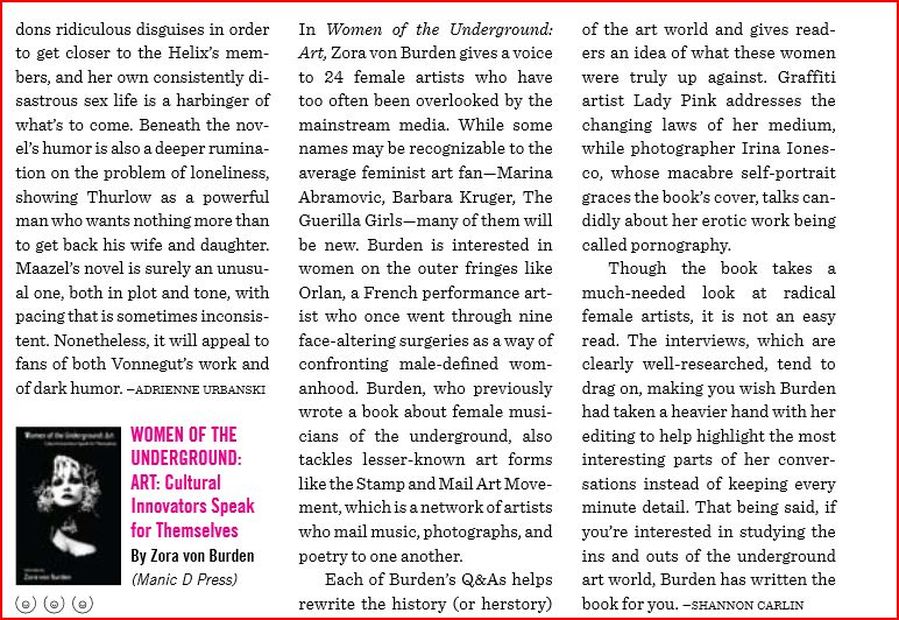 http://rayyaelias.com/wp-content/uploads/2013/03/BUST-Books.pdf
(c)2015-2016, Zora Burden; All Rights Reserved
This site is for informational and educational purposes.
FAIR USE NOTICE
This site may contains some copyrighted material which has not been specifically authorized by the copyright owner. We are making such material available in our efforts to advance understanding of environmental, political, human rights, economic, democracy, scientific, and social justice issues. This constitutes a 'fair use' of any such copyrighted material as provided for in section 107 of the US Copyright Law, in accordance with Title 17 U.S.C. Section 107. The material on this site is distributed without profit to those who have expressed a prior interest in receiving the included information for research and educational purposes.